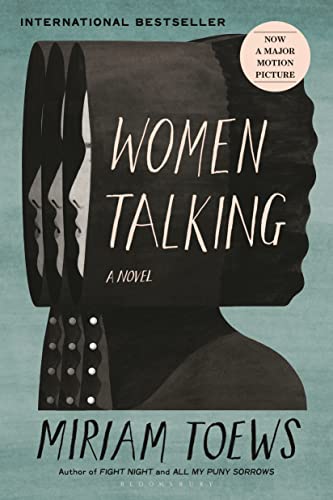 “This amazing, sad, shocking, but touching novel, based on a real-life event, could be right out of The Handmaid’s Tale.”  —Margaret Atwood, on Twitter

“Scorching . . . a wry, freewheeling novel of ideas that touches on the nature of evil, questions of free will, collective responsibility, cultural determinism, and, above all, forgiveness.” —New York Times Book Review, Editors’ Choice

NAMED ONE OF THE MOST ANTICIPATED BOOKS OF 2019 by Entertainment Weekly * Vulture * BuzzFeed * The Boston Globe * The A.V. Club * Nylon * Medium * The Millions * Huffington Post * The Rumpus * Lit Hub * Publishers Weekly * The Week * AM New York

“Miriam Toews is wickedly funny and fearlessly honest . . . She is an artist of escape; she always finds a way for her characters, trapped by circumstance, to liberate themselves.” —The New Yorker

“A feminist manifesto that delicately unwraps the horror, but also bubbles with the love and wry humor that has endeared Toews to her readers . . . Toews’ celebrated novels are haunted by her upbringing, but she has never written with such heartbreak, or taken such sure aim at fundamentalism and its hypocrisies, as she does in her new book, Women Talking . . . Did I mention the book is funny? Wickedly so, with Toews’s brand of seditious wit.” —The New York Times

“Astonishing . . . Toews, who has written often about her own Mennonite history, has told a riveting story that is both intensely specific and painfully resonant in the wider world. Women Talking is essential, elemental.” —USA Today

“Astonishing . . . a work of deep moral intelligence, a master class in ethics beautifully dressed as a novel. . . . The intelligence on display in Women Talking is as ferocious as it is warm.” —NPR.org

“[A] sharp blade of a novel . . . Toews’ knowing wit and grasp of dire subjects align her with Margaret Atwood, while her novel's slicing concision and nearly Socratic dialogue has the impact of a courtroom drama or a Greek tragedy. . . . ‘Women talking’ has always been potentially revolutionary. Women are now speaking out about sexual assault and the code of shamed silence in its wake to an unprecedented degree, yet such agonized disclosures continue to be dismissed as the products of 'female imagination,' a contemporary variation on ‘hysteria.’ Toews’s clarifying novel will help further dismantle the toxic habits of sexism.” —Booklist, starred review

“Miriam Toews’s Women Talking is a flawless, ferocious work of art. This is the kind of novel that changes you. Get ready.” —Laura van den Berg, author of The Third Hotel

“Terrifying and profound.” —R.O. Kwon, author of The Incendiaries

“Powerful . . . Through Epp, Toews has found a way to add lightness and humor to the deeply upsetting and terrifying narrative while weaving in Epp’s own distressing backstory . . . through him readers are able to see how carefully and intentionally the women think through their life-changing decision-critically discussing their roles in society, their love for their families and religion, and their hopes and desires for the future. This is an inspiring and unforgettable novel.” —Publishers Weekly, starred review

“Women Talking is an astonishment, a volcano of a novel with slowly and furiously mounting pressures of anguish and love and rage. The always-wondrous Miriam Toews has written a book as close to a Greek tragedy as a contemporary Western novelist can come.” —Lauren Groff, author of Fates and Furies and Florida

“This chilling novel, leavened with notes of humor, is based on actual attacks on women in a remote Mennonite colony in Bolivia.” —Shelf Awareness, starred review

“Terrifying, joyful, gruesome, and magnetic. What a reckoning-and what a gift.” —Leni Zumas, author of Red Clocks

“This is fiction as deliberation, and yet it feels packed with drama. It also feels infused with a deeply sympathetic understanding of the way women talk. . . . [Toews] draws us into the lives of obscure people and makes their survival feel as crucial and precarious as our own.” —Ron Charles, The Washington Post

“Women Talking crackles with the energy of consciousness on every page. Its attention is tender and funny, its characters utterly distinct and alive.” —Leslie Jamison, Bookforum