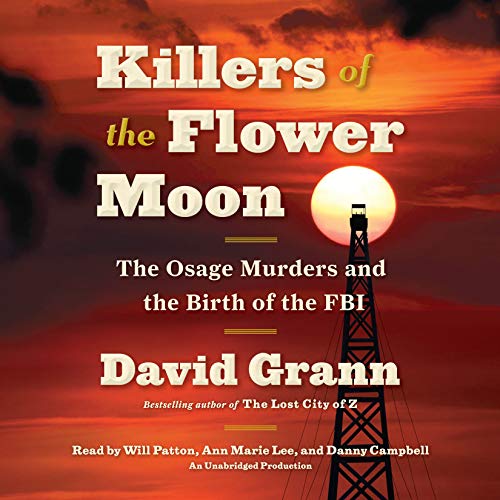 Killers of the Flower Moon: The Osage Murders and the Birth of the FBI

In the 1920s, the richest people per capita in the world were members of the Osage Nation in Oklahoma. After oil was discovered beneath their land, the Osage rode in chauffeured automobiles, built mansions, and sent their children to study in Europe.

Then, one by one, the Osage began to be killed off. The family of an Osage woman, Mollie Burkhart, became a prime target. One of her relatives was shot. Another was poisoned. And it was just the beginning, as more and more Osage were dying under mysterious circumstances, and many of those who dared to investigate the killings were themselves murdered.

As the death toll rose, the newly created FBI took up the case, and the young director, J. Edgar Hoover, turned to a former Texas Ranger named Tom White to try to unravel the mystery. White put together an undercover team, including a Native American agent who infiltrated the region, and together with the Osage began to expose one of the most chilling conspiracies in American history.

This discussion guide and recommended reading was shared and sponsored in partnership with Penguin Random House.

What do the contemporary media reports on the wealth and lifestyle of the Osage reflect about white perceptions of Native Americans (pp. 6–7; pp. 76–77)? In what way do they lay a foundation for the way the murders and mysterious deaths were treated by law enforcement?

What was your first impression of William Hale (p. 17)? How does Grann bring to life his strengths and appeal, as well as the darker side of his nature? What qualities does he share with people who achieve power and influence today?

How did you respond to the description of law enforcement in America during the 1920s (p. 19)?  What elements most shocked or surprised you? What made the situation in Osage County particularly chaotic? What effect did this have on the investigations into the deaths of Anna Brown and Charles Whitehorn?