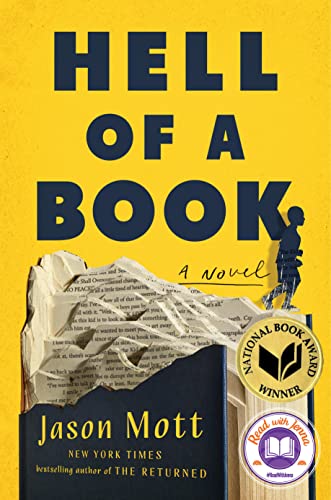 Hell of a Book: A Novel

What even is Hell of a Book besides a 2021 National Book Award finalist? It’s singular. “Singular” meaning both “exceptionally good or great, remarkable”; and “strange or eccentric in some respect.”

In Ralph Ellison’s Invisible Man, one of the greatest novels ever written, the protagonist, who is black, and never named, tells us that “I was never more hated than when I tried to be honest. Or when, even as just now I've tried to articulate exactly what I felt to be the truth. No one was satisfied.”

What is that truth for him? That he is “invisible...simply because people refuse to see me.” They “see only my surroundings, themselves or figments of their imagination, indeed, everything and anything except me.” This is Hell of a Book’s problem too. His black protagonist isn’t named either. It’s unclear, in fact, whether he’s even one person.

Yet, unlike Invisible Man, Hell of a Book is about authorship. (The protagonist is writing a book called Hell of a Book. It may or may not be the one you’re holding in your hands). And it’s about identity, and whether the particularity of someone’s personality even matters when they exist as a body that can be indiscriminately killed with no consequences. How to be honest about that fact?

If art is supposed to be about self-expression, how can an artist’s “self” take form when others don’t respect its individuality? This is not to call anyone a “victim.” What kind of art does that artist end up creating?

What am I talking about? Self-reference. It’s very confusing. When a statement, or--ahem--a novel refers to itself, our brains break down. The word for novels that do this is metafiction. Hell of a Book is metafiction.

Why is it written this way?

Question 2:  Ha. Question 1 is ridiculously hard. Let’s break it down. What’s the opposite of metafiction? Books where everything just happens normally. Where people behave like actual human beings would. That’s called naturalism. Here’s what the narrator has to say about that:

How does this book being self-referential allow the protagonist to exert control over his life? To what extent do we all imagine ourselves as the hero of a story?

Question 3: We’re getting closer. There is something about imagination, about its shaping power, that Hell of a Book believes is vital. That “reflecting reality” isn’t enough. But remember what Kelly says in the end to the protagonist. “Be a person. Be a real fucking person.”

How will the protagonist know when to stop fabulating?