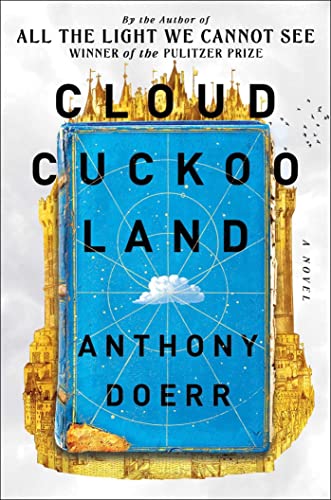 Anthony Doerr is an institution. He captures the minds of his readers. You may even start to sound like him in your head. Or out of your head. His first novel, About Grace, caused The New York Times to emit this sentence: “there’s a rapture with nature expressed in prose that sings off the page; an infinitely subtle algebra of resonance and sympathy between minds, lives, objects, light, senses, weather.” You can find more reviews like these festooning Doerr’s website.

Cloud Cuckoo Land, too, contains prose that sings off the page. More than anything, the way Cloud Cuckoo Land is written makes the novel a world for you, the reader, to traverse, almost like a video game. You will remain, ultimately, on that world’s beautiful surface, with the purpose of learning the book’s lessons. You must negotiate the strange topology of Cloud Cuckoo Land’s many characters and multiple timelines. Maybe you trip on some Ancient Greek phrases that stick up like roots out of a hiking trail.

“Cloud Cuckoo Land” is a Greek phrase, originally from Aristophanes’ play The Birds. Cloud Cuckoo Land’s “lessons” that I mention above are really just one lesson. Doerr believes, fervently, in the power of literature: that “a book is a resting place for the memories of people who have lived before. A way for the memory to stay fixed after the soul has traveled on.” Cloud Cuckoo Land rewrites the Greek classics to show how they might be preserved.

In an author’s note, Doerr says Cloud Cuckoo Land is a “paean to books,” meaning a song or story of books’ triumph. The novel tells how a fictional Ancient Greek book Doerr invents miraculously survives, in various forms, across history. So books do triumph in Cloud Cuckoo Land! Or maybe just Doerr’s book does.

Our guiding discussion question for Cloud Cuckoo Land: does it allow you, the reader, to complete its mission for “books”? Meaning: does Cloud Cuckoo Land instill a greater love of “books” in you? Does it make you want to reach back into the past yourself and try to read the Odyssey again, say? Or another classic? Or is Cloud Cuckoo Land enough?

Read our Cloud Cuckoo Land discussion questions below to get a handle on that broader question.

1. What is the plot of this book? Who is the main character? These are boring questions! Welcome to English class! But, interesting ones to ask here, perhaps, because of Cloud Cuckoo Land's structure. Many stories, many points of view, many locations all are going on at once.

Where does the momentum of this book that keeps you turning pages come from?

2. I compared Cloud Cuckoo Land to a video game. Video game protagonists are left somewhat undefined, so the player can map their own identity onto the protagonist's blank canvas.

Do the characters in Cloud Cuckoo Land have distinct personalities? Do they speak differently? Think differently?

3. Cloud Cuckoo Land invests a huge amount of your readerly attention in details. Think of how it describes Constantinople, or the Ottoman army's process of moving the cannons. Doerr clearly did his research.

Does detail immerse you in the story or take the place of the story? Were there things you wanted more detail about that were left out?