An Arrow in Motion 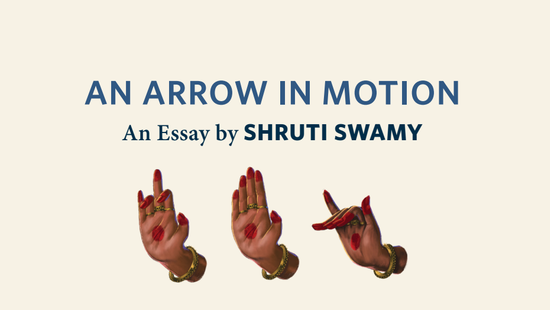 I was already an adult, I was nearly thirty, when my mother told me that as a child her brother had been returned. He had been returned to her mother, who had spent over a year apart from him. If this was not the word she used, returned, there is no other word I can think of when I remember it. My grandmother had been so sick after my mother’s younger brother was born that she could not care for him, and for the year or so that she was hospitalized, the boy, just a baby, was sent to live with relatives and not cared for well. The guilt of this separation shaped my grandmother’s whole life, and my mother’s too. Oh, that’s the beginning of a novel, I thought, when my mother told me this story, though I didn’t think mine, necessarily. And then one day the first chapter of The Archer sprung out from my fingertips, completely unbidden. The ease of that first chapter was followed by many long years of something like curiosity and something also like panic—what comes after? I have lots of ideas like this that die because I don’t have the interest or courage to sustain them—big ideas die easiest of all. Yet this one had got hold of me. The first chapter presented itself less like a gift and more like a question, one that sometimes frightened me, and one that had no answer. Or like a demand, the kind that love makes. As soon as I committed the words to paper, I understood not only that I must write this book, but also that it was my dharma to do so.

I am not a scholar of Sanskrit or Hinduism, but even I can tell you that while dharma is often translated as duty, the latter word lacks the complexity of the former. There is duty and obligation, words that hang heavy around your neck. Dharma contains this, but in my understanding also carries with it a sense of alignment between one’s life’s work and one’s own nature: in perfect alignment, the purpose becomes energizing, spurring you forward. You are called to this. This work will bring you closer to yourself.

Dharma is a concept that my protagonist, Vidya, wrestles with in my novel. She feels oppressed by it, like my mother did, as a young woman: the word, no matter how complex, can still be used in heavy ways, such as, What do we owe to each other, to our families, to our societies, to ourselves, and to our art? Dharma was imposed on my mother by the society at large and even by her relatively liberal family. My mother crossed an ocean to escape that dharma and find her own. I, decades later, wrote a book to understand her, to love her, and to understand myself.

Everything I write is fictional, even, to some extent, essays like this one. Everything I write is true. Long ago the book leapt off the track of my mother’s history and became another book, one that is, yes, about families, about mothers and brothers, but also deeply interested in the creation of art. Vidya dances kathak, the Indian classical dance form my mother studied and performed, but it is my kathak—filtered through my flawed and loving understanding.

I have always felt something like envy for dancers—like envy because I feel no bitterness, so maybe it is closer to longing—for the ways they get to bypass language completely and make their art with pure sense, with the immediate, incredible body, whose every limb and gesture is imbued with meaning. The word kathak comes from katha, which means story, but though kathak does have narrative elements, it is singular to me because of its transcendent qualities, where, through the shattering, precise, and increasingly quick movements of the feet, the body lifts above story, above language—the things I am constantly grappling with—above, almost, human limitation itself.

But not quite. There’s a ceiling too, in dance: the limits of the body, which are different from the limits of language, though as a writer I have only ever reached the limits of my own skill. The limits of language lie shining beyond, like a horizon I might never reach. I think Vidya, as a dancer, gets closer. Still, there is a gap, between the perfect shining thing that exists in one’s mind, and the flawed and humble thing one brings into reality. This gap, this reaching beyond, is what animates much of good art for me. Ravi Shankar expresses something like this in the beautiful documentary Raga: his music, he says, is a crying out to god. No matter how close he approaches perfection, he cannot reach it.

This novel too is a crying out. Though it contains nearly everything I have ever thought or felt, it is not the book I thought I was going to write; it is far from the glittering, pristine vision that I wandered in the early years. Here is the made thing: human-made, and humble, with all my fingerprints still on it. You can see where I tried, what I reached for, the wild energy of my wanting, and perhaps that’s what any “finished” work of art is. A novelist is an archer: we read to witness not the arrow striking the bull’s-eye, but the brave brightness of the arm pulling back the bowstring and letting the arrow fly.